The Jedi Temple and the Sith Rule of Two represent polar opposites as the focal points of the light and dark sides of the Force. Yet as different as they are these two represent the centralization of Force use. For the Jedi the Force is centered in the Temple on Coruscant, a physical centralization. To the Sith it is a personal centralization with the dark side concentrated in two individuals.

This is the image that the six as yet released Star Wars films presents, an image that was altered by the now apocryphal Expanded Universe (Legends) stories, many of which were written without the knowledge of how the Jedi and Sith would be portrayed in the Prequel films.

The later seasons of Star Wars: The Clone Wars and more recent additions to the new canon from Star Wars Rebels and Del Rey are pointing us in a new direction that may have a profound affect on the story of Star Wars: The Force Awakens and how the plot of the new trilogy develops.

The topic of Sith Shrines is something that Paul Herman wrote about in some depth last month. Without rehashing all of his article, I will make a few points. In the novel Tarkin, James Luceno includes a scene with Darth Sidious in a freshly excavated Sith Shrine below the old Jedi Temple on Coruscant. This was a scene that could have just as easily been set in the throne room or the Emperor’s office. The inclusion and description of the Sith shrine has indicated to many that this is a concept that is laying the ground work for something coming down the line in canon. In Tarkin we learn that the Sith shrine on Coruscant is over 5,000 years old and the Jedi Temple has been atop it for at least 1,000 years. Luceno makes clear that while the locations of these shrines may be secret there would seem to be many more in the galaxy, “Even the most powerful Dark Side Adepts believed that shrines of the sort existed only on Sith worlds remote from Coruscant…”

We further learn from Tarkin that Vader doesn’t yet know about the Sith shrine on Coruscant and likely doesn’t know about any others.

As has been discussed previously there has been some rumors that a character possibly Kylo Ren is obsessed with the Sith and a collector of Sith artifacts. This theory makes a lot of sense to me and would fit in with the newly introduced conception of Sith Shrines. Unlike the Jedi which guard their knowledge to protect the unsupervised, Sith would want to lure the untrained or partially trained Force-users to their shrines. Access would be easier but once the dark path is started down egress would be near impossible.

In the new canon we know of four Jedi Temples. The main temple on Coruscant, the temple on Ilum, the Temple of Eedit on Devoran, and the temple on Lothal. We see the Jedi Temple on Coruscant in the films and The Clone Wars. We saw Ilum made canon in The Clone Wars episode, The Gathering. The Temple of Eedit we see in The Clone Wars episode, Monster. This Temple is one that I don’t believe was confirmed as a Jedi temple on screen but it was pictured in the latest Rebels Recon video on StarWars.com. We see the Lothal Temple in the most recent Star Wars Rebels episode, Path of the Jedi.

Kanan gives us some background on the Jedi Temple system in Path of the Jedi:

“When I was your age there where around 10,000 Jedi Knights defending the galaxy, now we are few. But in those days we had small outposts, Temples spread throughout the stars. The Empire sought out these Temples and destroyed many of them, but not all. I want you to meditate, to let the Force guide you to one of them.”

In the latest episode of Rebels Recon, Star Wars Rebels co-creator and associate producer Carrie Beck expounds on the issue of the Temples, “there aren’t a lot of places where you find in Star Wars storytelling, where you actually delve deeply into home many temples are out there. Where are they in the galaxy?”

Pablo Hidalgo adds, “we’ve seen a couple in The Clone Wars so we know there are other temples scattered throughout the galaxy. The Jedi Order being as old as it was, developed over time and there would be these satellite institutions scattered outsider wherever the central Jedi Temple happened to be. ”

Dave Filoni gives further hints, “We had a long debate regarding the believably of one of these things being on the planet that Ezra is on, but at the end of the day it is all kind of working together somehow. In a bigger picture that we are not really revealing yet.”

It is important to note that according to the new canon, the Jedi Temple has been turned into the Imperial Palace and Palpatine would have access to any Jedi records not destroyed or otherwise hidden during Order 66. This is interesting and makes me wonder if Obi-Wan may have done more in the Temple computers than just change the answering machine message. What if he deleted the location of all the outpost temples? After all we know that Dooku deleted at least one planet from the Jedi star maps and that even Jocasta Nu had no knowledge of that planet. Sure Anakin/Vader would likely know the location of some of these but it is possible he wouldn’t know all, hence the fact that the Empire has destroyed “many…but not all” of them. That is just one theory, it is also possible that some of these Jedi satellite temples could be so ancient they are forgotten to even the Jedi themselves.

There is an interesting aspect to two of the other Jedi Temples. Both the the Ilum and Lothal Temples require at least a partially trained Force-user to gain entrance. At both Ilum and Lothal the Temple entrances were hidden and required the Force to trigger the Temples to open. As Ahsoka says in “The Gathering,” “Younglings, outstretch your hands and focus the Force, together and only together can we enter.”

This is an important fact because it points to the Jedi guarding their knowledge. This would likely prevent the likely stumbling upon Jedi knowledge by accident.

In the era of Star Wars: The Force Awakens:

By the time the events of The Force Awakens takes place it is likely that we still have at least a handful of these Jedi Outpost Temples and Sith Shrines still scattered across the galaxy. It seems in my mind that they could play a role in the plot of the sequel films, most likely a Sith shrine appearing in Episode VII and as a counterpoint the heroes searching for and uncovering a Jedi satellite temple in Episode VIII.

Only time will tell as to how much of a role these new temples and shrines will play in the new canon, but when it comes to the new continuity I don’t believe in coincidences.

Exclusive Star Wars: The Mandalorian Season 2 update! Nevarro or Mustafar? Or something else? Pics and video!

Exclusive Star Wars: The Mandalorian Season 2 update! Nevarro or Mustafar? Or something else? Pics and video! 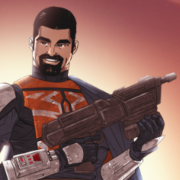 A contributor to MakingStarWars.net, Pete is also the co-host of the Rebels Report Podcast and editor of RebelsReport.com. Pete has a midi-chlorian count roughly equivalent to Tallisibeth Enwandung-Esterhazy.