Take this with a heaping pile of salt, as it’s my understanding that the Daily Mail isn’t the most reliable of sources, but the British tabloid is reporting that legendary, late actor Peter Cushing will return to his role of Grand Moff Tarkin from Star Wars: A New Hope and appear in Rogue One: A Star Wars Story thanks to the latest advancements in computer generated imagery.

A source told The Mail on Sunday: ‘This is one of the most complex and costly CGI re-creations ever. Cushing is a pivotal plot line as he was the one to create Darth Vader and there’s a whole back story that will come out.’

Ignoring the fact that Tarkin didn’t create Darth Vader and we’ve actually seen the villain’s creation in Star Wars: Revenge of the Sith, the tabloid mentions that they are having an unusual problem with their CGI recreation of the actor.

When director George Lucas filmed the original Star Wars, he gave Cushing and other Galactic Imperial officers ill-fitting leather riding boots. Cushing complained so bitterly that Lucas let him wear slippers, forcing cameramen to shoot from the knees up or have him stand behind the Death Star conference table.

‘They are going through hours and hours of old footage from the horror movies to recreate his legs and feet to produce realistic movements,’ said the source. ‘It is eerie to see someone who has been dead for so long come to life on a screen.’

Personally, I think it’s hilarious that they’d be able to recreate the actor digitally from old footage but couldn’t simply film someone’s legs and composite them in. Of course, being from the Daily Mail, it’s likely the whole story is rubbish, but it does bring up an interesting point: if the story of Rogue One revolves around the Death Star plans and Tarkin was instrumental in the battle station’s creation, could we see the character in the film, and if so, how would he be portrayed? I’ve often wondered if they couldn’t take an actor who looks close enough to Peter Cushing and use digital makeup to alter him further. One just needs to look at how they used digital makeup in Captain America: The Winter Soldier to make actress Hayley Atwell look much, much older as Cap’s former love Peggy Carter, or to Ant-Man to see Michael Douglas de-aged by about 30 years. Could such techniques be used to make one person more closely resemble another? (That’s if Tarkin appears in the film at all.) With Rogue One filming now for a December 2016 release date, hopefully we find out more information sooner rather than later.
Tags
Rogue One RogueOne Star Wars StarWars Tarkin
Share
Facebook Twitter Tumblr Reddit Share via Email 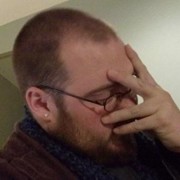 Jesse’s first memory is of seeing “Return of the Jedi” in 1983. He’s worked in television, commercial, and video production as well as dabbled in indie publishing before deciding to return to school.