Target revealed the cover art for its exclusive Blu-ray of Star Wars: The Force Awakens.  It’s made of all the character posters we saw prior to the film’s release. On the inside panels there are individual posters as well.

In addition to the art, the Target release will feature 20 minutes of exclusive content, including conversations with Daisy Ridley and John Boyega, as well as a deeper look into the movie’s weaponry.

Star Wars: The Force Awakens Blu-ray will be released on April 5th in the U.S. 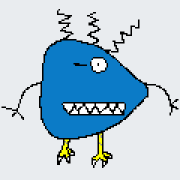