Similar to the mainline series, Marvel’s Star Wars: Poe Dameron is in an interesting position, in that, like Luke, we know nothing devastating can happen to our beloved X-Wing pilot. Sure, we may be in for a scare at times, but at the end of the day, he makes it to The Force Awakens. Thankfully, writer Charles Soule is smarter than the average writer by refusing to bait us into thinking otherwise. Rather, with this stellar conclusion to the arc, we are treated to an action-packed space battle and the return of a beloved character.

As mentioned before, there’s no question of whether Poe will make it out alive or not (unless…LMDs?), so the suspense has to be built elsewhere, and Soule directs our attention to the fight between the Black Squadron and Agent Terex’s crew. While it would have been more enjoyable to see this play out on screen, Noto does a great job capturing the intensity and tension of the battle. And down on the desert planet, Poe does his best to evade Terex and almost dies, if not for the help from a few special friends…

I will say that despite the “predictable” ending, there were a few surprises to be had, including what happens to Agent Terex. Without giving too much away, we are beginning to see a very interesting dynamic between the Resistance and the First Order, and it’s something I wish we would have seen more of during The Force Awakens. For the time being, it seems the Resistance does have the upper-hand, but as we all know, this won’t last for long.

Also, can we just talk about Noto for a second? I’ve heard rumors that he won’t be working on future issues (rumors that could easily be substantiated if I would simply do my research), but if that’s the case, I’ll definitely miss him. His cover art is always appreciated, but Poe Dameron is one of the few series I very rarely, if ever, have any qualms regarding the artwork. Even when the designs are at their simplest, it’s still gorgeous.

The reality of war is in the end, no one really wins. Every side suffers losses, and no matter the results, it won’t be long until shots are fired again. Soule and Noto do a great job of reminding us this while still providing a solid issue. It took a while for Poe Dameron to grow on me, but I’m glad I didn’t give up. All I know is I’m hoping this isn’t the last we’ve seen of Terex. He’s too good of a villain to say goodbye to this soon. 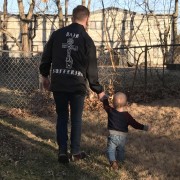 Husband. Father. Writer. M.Div. Co-creator of FirstOrderofBusiness.net. Co-host of the One Thousand and One Jedha Nights podcast.