This should be obvious from the title of this article, but please be warned, this article contains potential SPOILERS!

The folks over at ikwiz via the Hashtag show have leaked what appears to be the first full glimpse of Princess Leia (is it still “princess”?) from Star Wars: The Force Awakens.

You might remember that back in January, Jason shared some details on Leia’s outfit.  This is what he wrote then:

Princess Leia is wearing a solid jumpsuit. It is grayish blue. She wears a black vest which hangs below her waist. The vest is more in the style of the Tantive IV trooper than Han Solo’s classic vest. The jumpsuit has an open button-down collar and the cuffs are rolled up about two inches at her wrists. She has a thick black belt with a silver belt-buckle (very 1980).  Her hair is braided and pulled over to the side so it hangs over her left shoulder in a ponytail. Her hair is grey with dark blonde tones to it. She has dark black boots on with a darker black band around the top of them.

Leia’s costume really evokes the look and feel of the Tantive IV troopers sans the dopey space helmet. The blue with the black vest and the black boots almost works in a way as to state she is or was of those people. Its an early Spring attire that says “Remember Alderaan.” The under-jumpsuit really has an Empire Strikes Back vibe to it. But overall, she looks like the queen of the Tantive IV troopers.

In February, Jason drew up a sketch of Princess Leia’s costume that he saw.  His sketch looked like this: 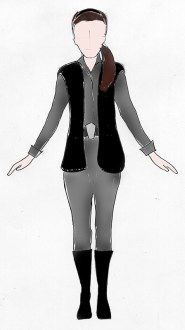 Well today’s leak from The Hashtag Show actually referenced Jason’s drawings and then released images from what they are calling a wardrobe fitting with Carrie Fisher:

It sure looks like it could be the same or similar image that Jason saw and the outfit certainly looks reminiscent of the Rebel troopers on the Tantive IV in A New Hope!

I think it’s interesting but I don’t love her look.  It’s not the most flattering but at least it’s functional.  I’ve never been a fan of those troopers on the Tantive IV.  Their whole uniform looks silly to me.  Literally every other Rebel uniform looks better than those troopers.  I guess in 30 years there hasn’t been time for better tailors!