Joao hasn’t been the biggest fan of The Clone Wars over the years, but he’s willing to give them another look to see if he’ll change his mind.

Marvel’s Han Solo comic announcement
The Force Awakens Blu-ray covers reveled
the release of The Force Awakens on Blu-ray and digital
The deleted scene list
Rogue One sizzle reel
Daisy Ridley comments on the opening of Episode VIII
Blogger Spotlight
Rediscovering The Clone Wars (The Clone Wars movie)
Anakin taking on a Padawan learner
Is Ahsoka a powerful Jedi?
Why was Anakin given a Padawan?
Dooku’s plan
If you have any questions or comments for the podcast, send them to feedback@thecantinacast.net or #CantinaCast on Twitter. Please rate, review, and subscribe on iTunes. Thank you for listening. 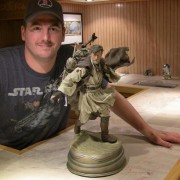